Fairs and Festivals and Creativity

Hessler was something special… unusual crush of people, lots of energy in the air, the wafts of euphoria of Case Western grads in their caps and gowns, excited parents, and so much more.

One fascination i have is with meeting new artists.  I love to see what others are doing and how they are progressing with the skills.  I walked Hessler several times… wonderful pottery, an amazing glass blower that created stellar works that were truely works of art, someone that carves frog figures and makes them into frog calls by twisting a small dowel in the body of the frog, amazing tie dye… and on and on

But i was stopped at one booth because she had scarves that were off white to beige brown, organic patterns, leaves, needles, pinecones patterned into the previously white fabric.  She practices something called eco dying, by using natural elements like leaves, and rolls them tightly in the fabric, ties the bundle and she said she drops the bundle in boiling water.  the magic happens with the heat, and the leaching of the colors into the fabric just like controlled staining.  They were breathtaking, and i see noone around here doing that. 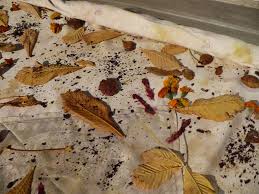 I certainly wish i had photographed her work, as these are photos i found on the internet, which are similar in nature.  Makes me want to start another project and experiment with eco dying.  What do you think?