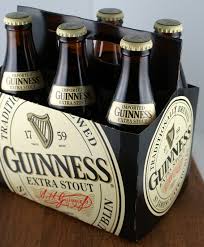 Recently while I was at the Textile Art Alliance an old artist friend stopped and asked “Well, do you guys make beer soap?”  She has a lovely Alpaca Studio in Chagrin Falls, and has been aware of our soap in the Valley Art Center.  She was looking for something unique, different, and something that might be male focused.  Thus – Beer Soap!

Oddly we have done some research because of a curiosity about how beer impacts the lye formula.  One of the most important part of making beer (or wine) soap is the process of removing the alcohol content… through boiling the beer for a half hour, then chilling the remaining flat beer until chilled cool.   If there is even a hint of alcohol content to the beer (or wine) as it hits the lye solution there is an explosive volcanic effect.  Nobody wants caustic lye solution muddled with beer oozing everywhere….. so Steve took one evening to boil each of the batches of beer for his soap.

The funny thing is it was not so noticeably strong smelling until i let our dogs out and then stepped back in the house….. whew was that beer vapor strong!!!  Steve is working on 3 different recipes:

We have learned a lot about the nutrients in beer, and how amazing they are for the skin.The beer soaps are great smelling soap that both men and women find very appealing.  Did you know that beer soap does not smell like beer… but it picks up the aromas of the ingredients it is made from – hops, grains, malt.  And yes, we add a bit of essential oil to balance the scent of the soap.

Also we found out that hops are beneficial for soothing irritated skin, and soften skin because of their amino acid complex.  Of course hops are an important component of beer productions, but there have been other uses for it.  Hops have been considered a wonderful natural remedy for sleeplessness, and in some places in Europe people would sew small pillows filled with hops to sleep with.

Another fun fact is the story of Guinness – not so much with the focus on the alcoholic beverage, but on the nutrients and health benefits.  Wikipedia writes this:

Studies claim that Guinness can be beneficial to the heart. Researchers found that “‘antioxidant compounds’ in the Guinness, similar to those found in certain fruits and vegetables, are responsible for the health benefits because they slow down the deposit of harmful cholesterol on the artery walls.”

Guinness ran an advertising campaign in the 1920s which stemmed from market research – when people told the company that they felt good after their pint, the slogan was born – “Guinness is Good for You”. Advertising for alcoholic drinks that implies improved physical performance or enhanced personal qualities is now prohibited in Ireland.Diageo, the company that now manufactures Guinness, says: “We never make any medical claims for our drinks.”

The production of Guinness, as with many beers, involves the use of isinglass made from fish. Isinglass is used as a fining agent for settling out suspended matter in the vat. The isinglass is retained in the floor of the vat but it is possible that minute quantities might be carried over into the beer.

And there are stories of how the high mineral content of this beer has been beneficial to the Irish people because their diets were depleted of some of the important vitamins and minerals.

OK, I know, i am not advocating consuming lots of beer.  But i will tell you i think we found something quite interesting here.  And we will be delivering our first batches of beer soap to the Alpaca Studios on Bell Street in Chagrin Falls early next week.